We will be updating this page with the information regarding the investigation into the deaths of Andrei Mironov and Andy Rocchelli.

On May 25, 2014 the Russian-backed separatists recovered the bodies of Andrei Mironov and Andy Rocchelli from a ditch near the village of Andreyevka. Reporters from Russia Today interviewed the two separatists who brought the bodies to the local morgue.

The second video is an interview with the driver who was at the scene with Andrei and Andy but who managed to escape in his car and survive the attack.

Witness Statement from the French journalist, William Roguelon, who survived the attack. 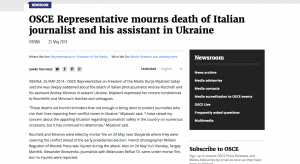